Welcome to Cuba!  Famous for its breath-taking coastline, revolutionary iconography and seductive latin rhythms, this Caribbean island is also something of a haven for classic car lovers.  Ever since Fidel Castro banned foreign car imports in the late 50s, the country has been stuck in a timewarp and now has over 60,000 classic cars in daily use across the island.

Bespoke Rallies invite you to bring your own classic on a unique and exhilarating 18-day journey covering the width and breadth of this beguiling island. Setting off from the hustle and bustle of Havana, you’ll soon venture off the beaten track and experience the sights and sounds of everyday Cuba in a way no other visitors can.

Our carefully planned route takes in every aspect of the island’s landscape – from its mountain ranges and waterfalls, to its lush valleys and white sandy beaches. Every day will take you back to a bygone era, as you become immersed in Cuba’s unique history; look out to sea from the spot where Columbus landed on his first voyage to the Americas in 1492; visit the tobacco and sugar plantations across the island that so much of its wealth was built upon; explore the uniquely preserved colonial cities, their pastel-coloured buildings and cobbled streets; and witness the island’s iconic landmarks – the Bay of Pigs and Guantanamo Bay – that signpost some of recent history’s most significant events.

Taking in major highways, and lesser known byways, the Cuba Classic is a driver’s dream: we start our journey on the Malecón, the famous six lane avenue that runs for more than 7 km along Havana’s seafront. We’ll scale the heights of La Farola, the 6 km long elevated viaduct that snakes its way over the mountain pass en route to Baracoa, and traverse the 48km causeway that connects the mainland to the island of Cayo Santa Maria. At the end of each day’s driving you will recuperate in the finest hotels, with regular rest days providing a chance to explore on your own, immerse yourself in the local culture, or just spend some well-earned time-out sunbathing under palm trees.

The experienced Bespoke Rallies team will be there to help every step of the way. We’ll arrange the shipping of your car, provide the all-important visas, convert your money and deal with the official paperwork. All driving is scheduled during daylight hours and we’ll keep you on course with our meticulous roadbook, our smartphone app and some good old-fashioned maps. And of course, we have a fulltime professional mechanic on hand to make sure your car is healthy – and a medic to ensure the same of you.

Mixing the exotic colour of the tropics with old-school colonial charm and a bit of revolutionary magic, this is like no other journey you’ve ever taken. It’s the ultimate Cuban roadtrip. 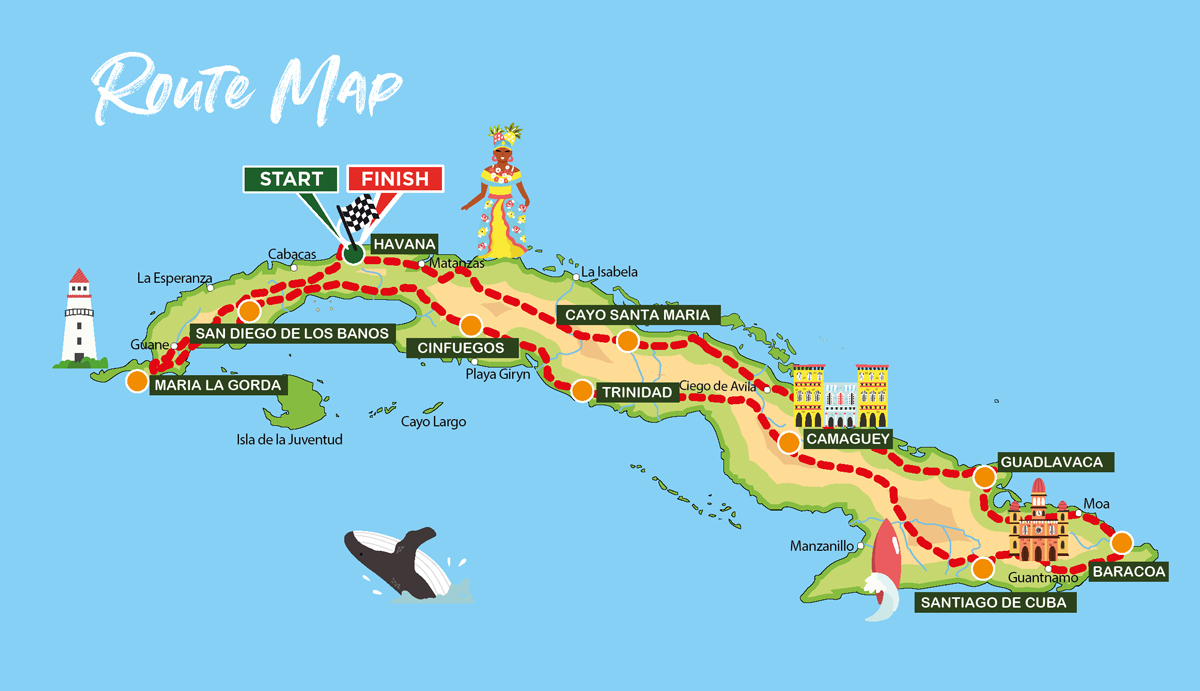 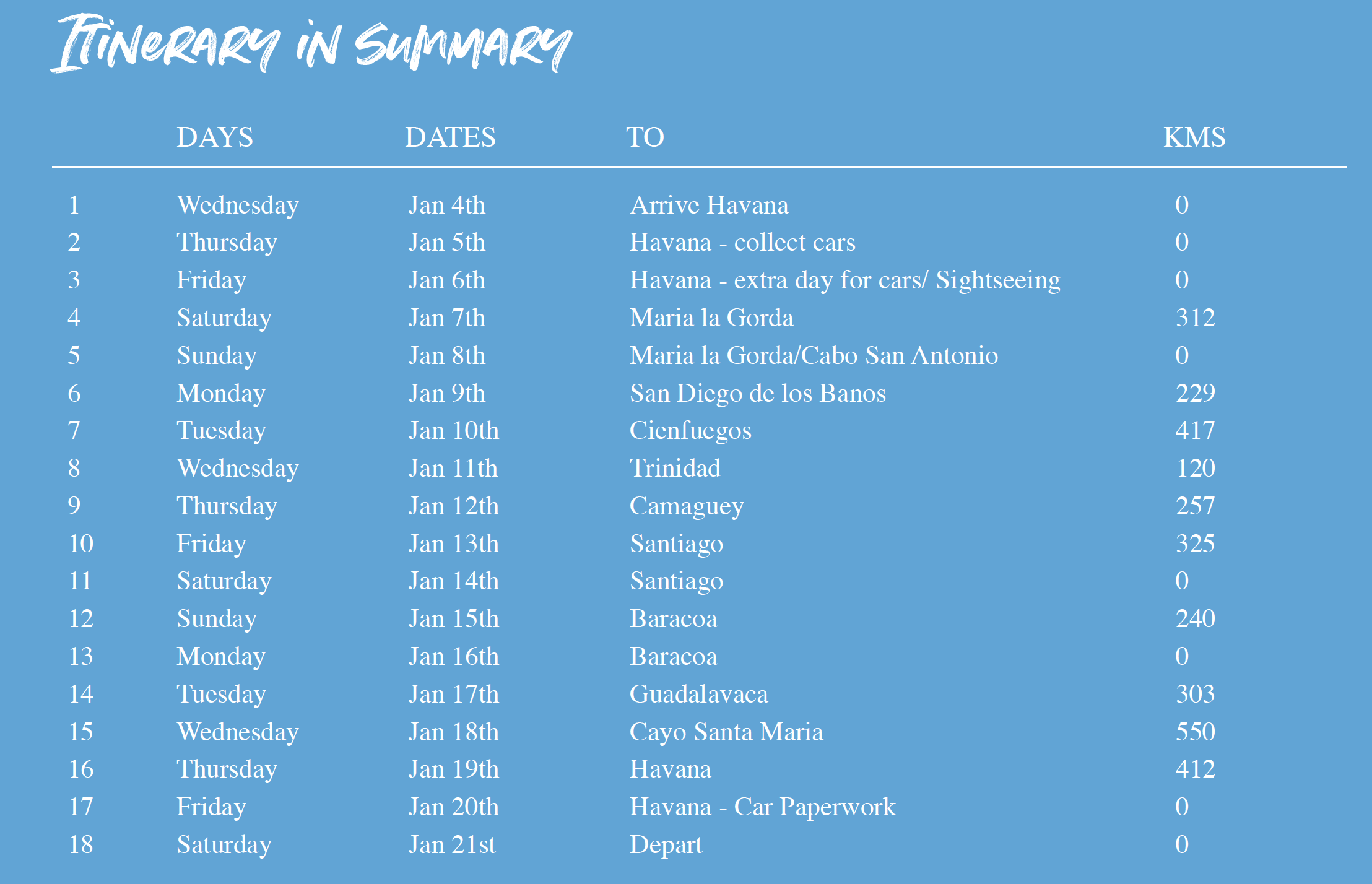 Upon arrival at José Marti International airport you will be escorted through customs to the VIP lounge where you can enjoy an open bar while your luggage is collected for you. Private transfer to the Hotel in Havana takes around 25 minutes.

Three nights’ accommodation are provided at the brand new Gran Hotel Manzana Kepinski, located in the centre of Havana on the Malecón, the broad avenue that runs for more than 5 miles along Havana’s seafront. It famously formed part of the route of the 1st Grand Prix de Cuba in 1957.

After collecting and registering your car, you will have an opportunity to meet local car clubs and take a look around the city. Soak up the atmosphere in Old Havana, with its colonial buildings and cobbled streets; explore historical sites like Revolution Square – the site of Fidel Castro’s many speeches and political rallies. Or if it’s culture you want, why not visit one of the city’s many museums or galleries.

In the evening we will gather for a group meal to celebrate the start of the rally. Accommodation at the Meliá Cohiba

A spare day in case collection of the cars is delayed.

Making our way to the start line for 9am, we will set off to the Guanahacabibes Peninsula, a National park at the western end of the island. Separated from the rest of the island by plains of purest silica white sand, its dense forests provide a home to many rare animals including over 170 species of bird. Two nights’ accommodation at the Maria la Gorda Hotel.

Why not take the stunning coastline road to the Cabo San Antonio, the westernmost tip of the island, just 160 miles across the Yucatan Channel from Mexico. The water at Maria la Gorda is famed for its unique ecosystems and has UNESCO Biosphere Reserve status. Home to various species of turtle and bottlenose dolphins its turquoise waters are popular with divers and a great location for sunset boatrides. Enjoy! Overnight at the Maria la Gorda Hotel

Heading eastwards, we leave the coastal plans of Maria la Gorda for an unforgettable drive across the rugged terrain of the Guaniguanico mountains and through the Viñales Valley.

This UNESCO World Heritage Site is best known for its tobacco plantations which still employ traditional farming practices, and for its unique limestone outcrops rising up to 300m from the valley floor. The day ends in San Diego de los Banos, feted as the island’s best spa location. Accommodation at the Hotel Mirador.

This journey takes us alongside the Ciénaga de Zapata National Park, a complex ecosystem of grasslands, mangrove forests, coral reefs, and underwater canyons that supports an abundance of wildlife. The afternoon includes a visit to the Bay of Pigs, site of the infamous failed US invasion in 1961 that soured US/Cuban relations and cemented Castro’s role as a national hero. The day ends in the waterfront city of Cienfuegos, known as La Perla del Sur (the Pearl of the South) and the only Cuban city that was founded by the French.

We will be staying at Hotel Jagua built in 1950s modernist style, just five minutes from the Old Town and overlooking the beautiful Cienfuegos Bay.

Today’s route takes us over the Escambray Mountain range famed for its caves, rivers, waterfalls, and canyons, to the World Heritage City of Trinidad. Its grand plaza and abundance of pastel-coloured, terracotta tiled houses mark it out as one of the best-preserved colonial cities in the whole Caribbean.

As we head inland, we make our way to the historical city of Camanguey, located in the central plains of the island. Rebuilt after a fire in the 17th Century it is a maze of cobbled winding streets and blind alleys, said to have been purposely designed to prevent potential invaders moving around inside the city. Make sure to keep an eye on your roadbook! Overnight in Casa Particular.

Leaving Camaguey we head out into the most mountainous region of the island en route to the bustling sea port of Santiago de Cuba. Cuba’s second largest city after Havana is a lively metropolis full of Caribbean spirit and charm and, as the historic centre of Cuba’s diverse music scene and home of the world-famous Bacardi brand, it is renowned for its bustling nightlife.

Heading eastwards we find ourselves high up into the mountains that separate the rest of Cuba from its most ancient city. Our route takes us along the most famous mountain pass in Cuba, the elevated viaduct of La Farola which twists and turns its way through forests before descending to the remote city at the easternmost tip of the island. Two nights’ accommodation in Hotel El Castillo.

Baracoa is a city rich with history. This is the spot where Christopher Columbus first landed in Cuba in 1492 – it soon became the first Spanish settlement on the island and its first capital some twenty years later. Explore the historic old town or venture out into the surrounding countryside where you will find Salto Fino, at 305m the highest waterfall in the Caribbean, and El Yunke, the 575-metre-high table mountain. Overnight in Hotel El Castillo.

Heading along the coast road to the west, we make our way to Guardalavaca, a coastal paradise that Columbus himself described as the most beautiful place he had ever laid eyes on. Accommodation will be provided in the all-inclusive five star Paradisus Rio Oro resort overlooking the beach of Playa Esmerelda.

This is the longest day of driving but it comes with its own reward. Our destination is Cayo Santa Maria, a small island on the archipelago that runs along Cuba’s north coast. Connected to the mainline by a 48km causeway – the longest in the world – this idyllic resort is pure escapism, with pampering, sunbathing and swimming 24/7. Two nights’ accommodation in the all-inclusive Melia Buenavista.

Soak up the sun and swim in the turquoise waters around this exclusive paradise island. Overnight at the Melia Buenavista.

Our final day of driving takes us to Santa Clara, site of the Che Guevara Mausoleum and the famous revolutionary’s final resting place. As we head back towards Havana we take in Camilo Cienfuegos. Better known as Hershey Village, it was built in 1916 by American Chocolate magnate Milton Hershey to house his workers and their families, and is the midpoint of the “Hershey Train” route, the only electric train service in Cuba.

Enjoy the hotel’s legendary breakfast before choosing how to spend your day. There’s one last opportunity to visit the city – perhaps buy some mementoes and gifts – or just lap up the luxury and relax by the pool.

After a final breakfast head off at noon for your onward
travel arrangements.

US CITIZENS
This rally is OFAC compliant and is a People to People event as we will have local drivers with us for the entire rally. Please see our website for the relevant information.

ACCOMODATION
We aim to provide the best and most suitable accommodation across the island, taking into account the need for parking and ease of access. Breakfast is included for each night and evening meals are provided on travelling days.

BACK-UP
As usual we will have an experienced mechanic with us and a medic to keep body, soul and car together.

Entry Fee: $25,250. Fill out the entry form and send a deposit to us to secure your place for this adventure. Included with your entry is: A twin or double room with breakfast for all nights of the event, most evening meals, welcome dinner, gala dinner, special Cuban experience, rally plates, decals, roadbook, navigation system, 3rd party insurance, emergency mechanical and medical assistance, finishers’ medals

‘Probably the best rally I have ever been on.
Great roads, fantastic ferry, good company and a thoroughly good time.’