Our White Nights is a two week rally to the Arctic Circle and beyond which brings together the best of Scandinavia including Denmark, Sweden, Finland and the Norwegian fjords

What are White Nights?

In the north of Europe in some countries the midnight sun period is known as White Nights and we travel as far north in Europe as we can go, crossing the Arctic Circle before arriving in Kirkenes, the most northerly town in Norway.

For 2023 we are ringing the changes by starting in Roskilde, one of Denmark’s oldest cities and its capital until 1443. Developed as a trading hub by the Vikings there is evidence it has been inhabited since the 6th century. Rich in history the town has several well-preserved 1000-year-old Viking ships. It also boasts a UNESCO Gothic cathedral which is the burial site for most Danish monarchs since the 15th century.

From Roskilde we rally to the Swedish town of Vaxjo known as ‘The Greenest City in Europe’ due to its eco-friendly ambitions. Then onto the old industrial town of Vasteras where we will be staying in a beautifully themed hotel built inside an old coal powerstation. The town hosted Sweden’s largest all-American car meet for more than 30 years, at its peak attracting more than 20,000 cars!

After an interesting drive we arrive in Mora, famous for the Witch Trials of 1669, and more recently for the production of Dala Horses and Mora knives. We have built in time to visit the respective factories. Afterwards we head for Ostersund on Lake Storsjon where the residents have focused on the quality of life rather than industry.

From Ostersund we continue north to Lycksele, the oldest continuous settlement built by the Sami people. Despite only having a small population it is classed as a city. Our next stop is Arjeplog, where, in the winter months the lake freezes and it welcomes most of the world’s car companies for the automotive winter testing season. Very close to the Arctic Circle it has long days and short nights in the summer.

From Arjeplog to a small resort near Kittila with the journey taking us through the Arctic Circle into Swedish Lapland and on to Finland.

From there we head on through Reindeer country where the trees begin to thin out and there’s a biting wind all winter. Our destination on this day is Kirkenes, the most northerly port in Norway (and interestingly it is also further east than Istanbul).

The following day we join the MS Nordkapp, our floating hotel for the next few days, and from which we can admire the crinkly edged fjords from land and see our way south.

Your Ship: We will be on the MS Nordkapp, one of the latest renovated and most luxurious on the fleet. Its more cruise than ferry and has comprehensive facilities on board including a couple of bars, two dining rooms, a grill a food court and even an outside Jacuzzi. The dining is exceptional and if you choose a suite you won’t be disappointed despite the extra cost.

• Twin or double room in all hotels

• Full board on the ship

• Evening meals on other days

• The crinkly edged fjords of Norway

• Competition up to Finland 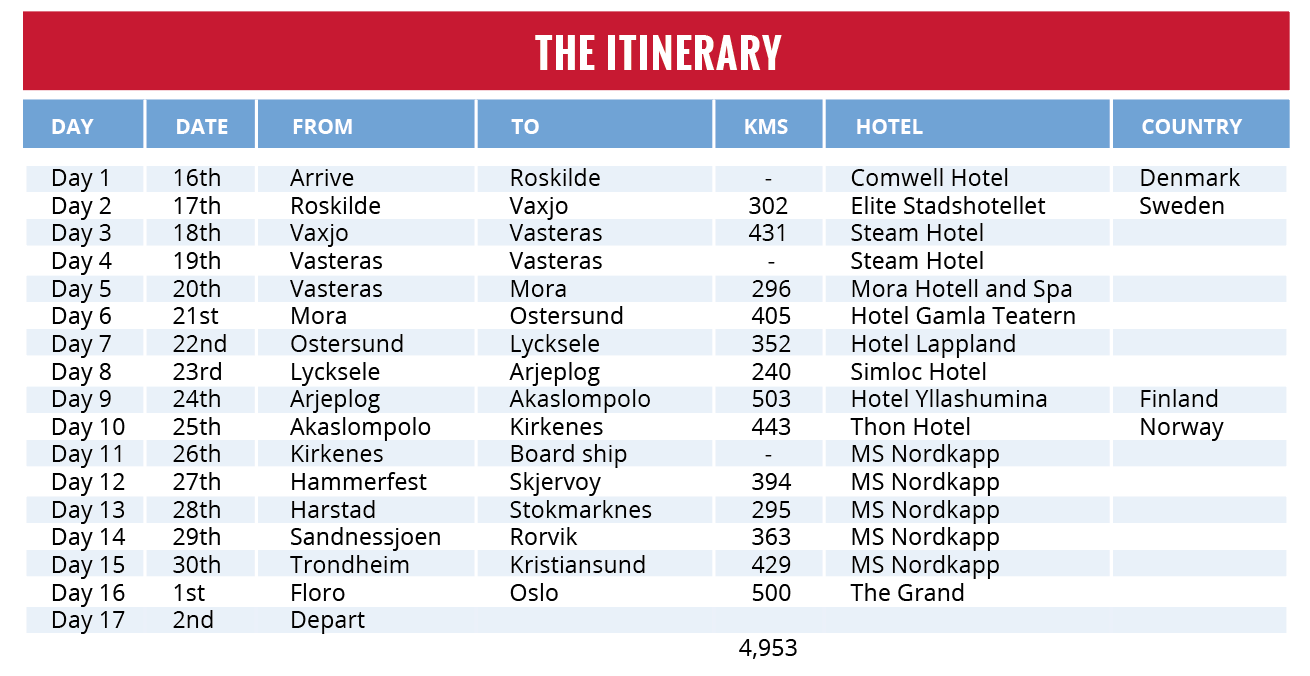 Starting in Denmark we find great accommodation all the way to Kirkenes where we board the ferry for six days and five nights which means you don’t have to unpack your bags for nearly a week – simply unique on any rally.

We will provide mechanical back-up and, of course, the services of our great team to make it all as smooth as possible.

All roads have been checked and the route is completely open. It is a mix of tarmac and a some dirt, mainly in Sweden, so is suitable for all types of vehicles. The winning car in 2017 was an E-Type Jaguar.

Northern Lights. It also means that there is no frost overnight although the mornings can be quite cool. Being out of the main tourist season also makes the journey more pleasant.

Bring a car with reasonable ground clearance and not too highly tuned as we cover a reasonable distance overall.

PAST RALLIES
We covered all over the world from South America to South Asia, Hindukush to Himalaya with thousands of travellers.

OUR TEAM
Our experienced and passionate team will help you to organise your event or you can enjoy our own tailor made rallies.

The Federation of British Historic Vehicle Clubs exists to uphold the freedom to use historic vehicles on the road representing over 250,000 members. We are proud to be a member of this fantastic federation.

Bespoke Handling have over 30 years’ experience in vintage, classic and racing car transportation and shipping. Whether it is for a rally, an auction or an exhibition they have the expertise to ensure that your valuable car arrives in perfect condition on the agreed day.

‘We had a lovely time and the support car was always on hand when needed.‘