The second PanAm Classic takes us from colonial style Charleston on the Atlantic coast of the USA, through the mid-west over memorable mountains, across the dust bowl and Death Valley to the Yosemite National Park to finish on the Pacific Ocean at the great Pebble Beach Concours, where VIP entry is included.

Taking us on a fantastic ride up mountains, down switchbacks, twisting and turning all the way, this  24 day tour de force  travels the byways of this great country in the footsteps of the pioneers of days gone by. While we enjoy the route following in their tracks we can marvel at the great scenery that must have been jaw dropping for the travellers of 200 or more years ago.

Not only do we go to some of the great music venues of more modern times, we will also visit the towns and times made famous by the cowboys and the drive to find new and exciting lands.

We stay off the highways as much as possible and travel the byways, searching out the best roads for such an amazing coast to coast trip.

We also offer the option of staying on for the duration of the Pebble Beach Concours giving you the opportunity to make the most of your visit.

While the PanAm is designed as a competitive rally there is a Touring class as well plus a category for muscle cars, old and modern.

In total there are 16 driving days plus 5 rest days at the best places to ensure you don’t see everything in your rear view mirror!

Most of the competition will be of the Regularity variety although there may also be driving tests. An awe inspiring route awaits.

We start in the pretty colonial town of Charleston, the South Carolina port city founded in 1670. It is defined by its cobblestone streets, horse-drawn carriages and pastel antebellum houses, particularly in the elegant French Quarter and Battery districts. The Battery promenade and Waterfront Park both overlook Charleston Harbour, while Fort Sumter, a federal stronghold where the first shots of the Civil War rang out, lies across the water. Our day is a mixture of tarmac and light gravel providing a straightforward start to the coast to coast adventure.

Greenville claims to be the friendliest town in the USA as well as the 6th smallest. It has a quaint main street, bustling art scene including jazz and and a culinary reputation. Set in the foothills of the Blue Ridge mountains it has spectacular views and nearby waterfalls.

Our driving day is spectacular and includes the great Tail of the Dragon pass with 318 bends in just 11 miles. We also drive through Brevard, the heart of the Antebellum Southern Belles of the Carolinas of old. We drive through Caesars Head State Park and the Mountain Bridge Wilderness area where we pass the Looking Glass Falls.

Today we get a chance to see into the backyards of America as we truly get out into the boomdocks. We pass white weatherboarded churches in abundance and can marvel at the lawnmowing prowess of the locals. Today we cross into Tennessee and visit the Daniel Boone Forest. We barely touch the highways until we near Nashville, the country music capital of the world. Our hotel is near the Grand Old Opry but downtown is where the action is. We take a day off here to sample the music and the Lane Museum of Unique Cars.

Located on the Mississippi River, Cape Giradeau is referred to as the prettiest town in Missouri, due to its preservation of the historic buildings. Sometimes called the City of Roses it once had a nine-mile stretch of highway lined with rose bushes. Today we drive by Kentucky Lake across the Mississippi river.

Day five takes us onwards through the Mark Twain National Forest on empty gravel and tarmac roads. It’s a great area of wilderness with inspiring views and fabulous roads finishing in Springfield on the edge of the Ozark Mountains. A fabulous day’s driving.

Next up is Tulsa. Today we start to come out of the mountains for a while crossing the farming heartland of the state which has surprisingly excellent and smooth dirt roads. Tulsa is, of course, famous for the song 24 Hours from Tulsa. It is situated on the Arkansas River between the Osage Hills and the foothills of the Ozark Mountains in northeast Oklahoma, a region of the state known as “Green Country”. Considered the cultural and arts centre of Oklahoma, Tulsa houses two art museums, full-time professional opera and ballet companies, and one of the nation’s largest concentrations of art deco architecture.

Today we truly drop out of the mountains and onto the mid-west to one of the most famous cowboy towns which has featured in many a western. Roads are long and straight but nonetheless the journey is exhilarating.

Dodge City became famous as a true frontier settlement of the Old West. It had more famous (and infamous) gunfighters than any other town in the West. It also boasted the usual array of saloons, gambling halls, and brothels, including the famous Long Branch Saloon.  For a time in 1884, Dodge City even had a bullfighting ring where Mexican bullfighters would fight specially chosen Longhorn bulls.

We spend most of the day crossing the panhandle and it could be dry, dusty and hot. A vast agricultural area it suffered during the great depression and the dust bowl of the 1930s.

Colorado Springs is a breath of fresh air after the dusty day on the road. It is the gateway to the Southern Rocky Mountains and at the base of Pike’s Peak which we will drive on our day off.

As a change to driving west, today we head south where we pick up more mountainous roads and spectacular views in the southern Rockies. The scenery changes from the wide open prairies to the tree lined pine forests that are typical of the area.

We start by climbing through the forests on a spectacular gravel track by the side of a canyon to the high Mesa’s a sparsely populated and traffic free run for most of the day. Incredibly scenic day with fuel stations being few and far between. Durango is a highlight of the rally with a classic feel to it, helped somewhat by the Durango to Silverton steam railway which puffs through the middle of the town.

From Durango we head through the Rockies on an original stagecoach route switching between tar and gravel all day. Out of Durango the road is known as the Million Dollar Highway although the origin of the name is disputed. The most likely is that it cost a million dollars to build in the 1920s but another more romantic idea is that the dirt used in the construction could contain a million dollars worth of gold dust. Whatever the truth, it is a spectacular drive. Tonight we stop in Moab, Utah, the Colorado River crossing point of the Old Spanish Trail.

Something of a desert fest on this day. Once again there are familiar sounding Western towns, going through the Valley of the Gods as well as Monument Valley to places such as Medicine Hat. From Moab we take the Highway for a few miles before leaving the main route at the Devils Canyon turn. This leads into the Valley of the Gods where the rocks resemble faces of the ancients according to the Navaho who inhabited the land originally. Monument valley, probably the most photographed canyon in the USA and run by the native peoples.

A mixed day of highway and canyons. First up is Cottonwood, a great favourite to drive for good reason. It has fine roads and scenery, places to stop and admire the view, fords to cross and is just the right distance. Then we have a great drive to Duck Creek Village through the Black Mountains, Lone Tree Mountain, Pocket Mesa and Tabernacle Mountain to name a few. Our run into Las Vegas is not so interesting as its mostly on a busy highway.

Death Valley and the Sequoia forest in the Sierras – deserts to mountains in a day. We start off heading into Death Valley where it can be fearsomely hot at this time of year.  Arriving in Lone Pine we head north and cooler roads to Mammoth Lakes. The town was a centre of a gold rush in 1878 growing from a few people to 1500 in a matter of months. By 1888 the rush was over and the population was down to just 10! Tourism is now the main industry although logging is still important in the area. The summer weather is Mediterranean so a pleasant change from the last few days.

We drive from Yosemite to the spectacular Morro Bay, a coastal city known for Morro Rock, an ancient volcanic mound at the end of Morro Rock Beach. Trails lead up Black Hill for views over the city and Morro Bay.

The last full drive of the rally is a mixed bag of mountains, straight roads and more mountain roads before dropping down to the coast and a sight of the Pacific Ocean. We join the Pebble Beach Concours celebrations and a deserved rest.

We aim to provide the best and most suitable accommodation throughout the rally, taking into account the need for parking and ease of access. Breakfast is included for each night and evening meals are provided on travelling days.

Open to all Classic cars 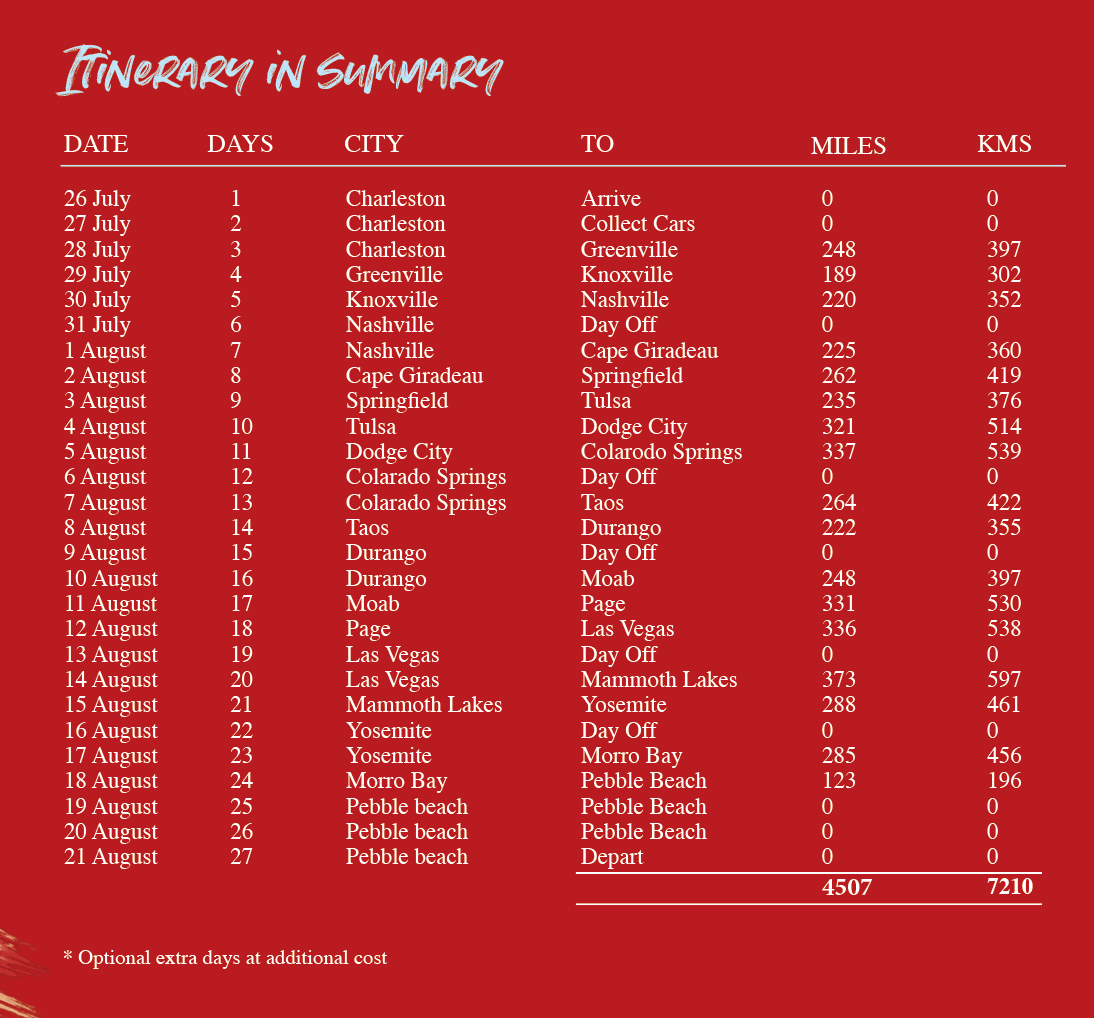 The rally is timed to coincide with the Pebble Beach Concours d’Elegance, the most prestigious event on the classic calendar on the West Coast. We have VIP entry and the option to stay on for a few more days if you wish.

Download an entry form below or drop us an email if you require more information. We have 20 places on this fantastic event that will surprise you with the beauty and breadth and scale of the country. The Americans love their classic cars as well as meeting new people so expect a warm and genuine welcome. This is a truly spectacular journey across the mid west – it’s not to be missed.

‘Probably the best rally I have ever been on.
Great roads, fantastic ferry, good company and a thoroughly good time.’